A collection of writings related to travel and nature and links to the people who inspire us.

The Road Not Taken – Robert Frost

Two roads diverged in a yellow wood,
And sorry I could not travel both
And be one traveler, long I stood
And looked down one as far as I could
To where it bent in the undergrowth;

Then took the other, as just as fair,
And having perhaps the better claim,
Because it was grassy and wanted wear;
Though as for that the passing there
Had worn them really about the same,

And both that morning equally lay
In leaves no step had trodden black.
Oh, I kept the first for another day!
Yet knowing how way leads on to way,
I doubted if I should ever come back.

I shall be telling this with a sigh
Somewhere ages and ages hence:
Two roads diverged in a wood, and I —
I took the one less traveled by,
And that has made all the difference.

“We must not cease from exploration. And the end of all our exploring will be to arrive where we began and to know the place for the first time.” ~ T. S. Eliot

“Sometimes I arrive just when God’s ready to have someone click the shutter.” ~ Ansel Adams

“We admire elephants in part because they demonstrate what we consider the finest human traits: empathy, self-awareness, and social intelligence. But the way we treat them puts on display the very worst of human behavior.” ~ Graydon Carter

“May the Roar of the African Lion be heard by the Children of our Children’s Children Forever.” ~ Game Rangers’ Association of Africa

“Nature is not a place to visit. It is home.” ~ Gary Snyder

“To him who has once tasted the reckless independence, the haughty self-reliance, the sense of irresponsible freedom, which the forest life engenders, civilization thenceforth seems flat and stale. Its pleasures are insipid, its pursuits wearisome, its conventionalities, duties, and mutual dependence alike tedious and disgusting. The entrapped wanderer grows fierce and restless, and pants for breathing-room. His path, it is true, was choked with difficulties, but his body and soul were hardened to meet them; it was beset with dangers, but these were the very spice of his life, gladdening his heart with exulting self-confidence, and sending the blood through his veins with a livelier current. The wilderness, rough, harsh, and inexorable, has charms more potent in their seductive influence than all the lures of luxury and sloth. And often he on whom it has cast its magic finds no heart to dissolve the spell, and remains a wanderer and an Ishmaelite to the hour of his death.” ~ Francis Parkman

AFRICA SMILED
– A poem by Bridget Dore, dedicated to Madiba (Nelson Mandela)
Africa smiled a little
When you left.
“We know you,” Africa said,
“We have seen and watched you,
We can learn to live without you,
But We know
We needn’t yet.”
And Africa smiled a little
When you left.
“You cannot leave Africa,” Africa said.
“It is always with you,
There inside your head.
Our rivers run in currents
In the swirl of your thumbprints;
Our drumbeats
Counting out your pulse,
Our coastline,
The silhouette of your soul.”
So Africa smiled a little
When you left.
“We are in you,” Africa said.
“You have not left us, yet.”
“There is a pleasure in the pathless woods,
There is a rapture on the lonely shore,
There is society, where none intrudes,
By the deep sea, and music in its roar:
I love not man the less, but Nature more”
― George Gordon Byron 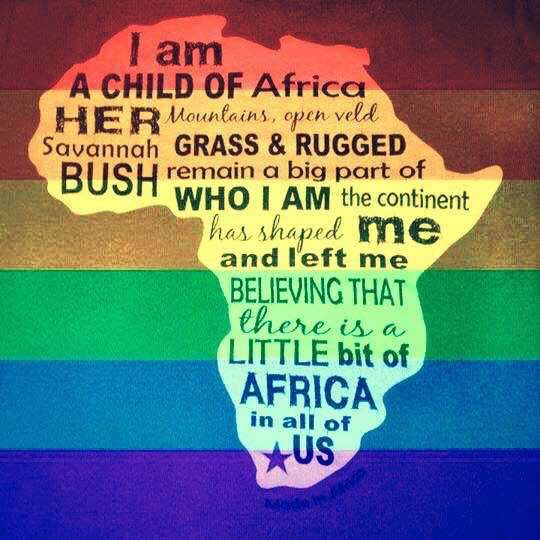